Video (Free)
This content is no longer available for credit. Accreditation for this activity expired April 30, 2016.

Epidemiology and impact of metastatic breast cancer
Breast cancer is the most common malignancy in women in the United States. According to estimates from the American Cancer Society, up to 3.1 million women living in the United States have a history of invasive breast cancer, and 232,000 new breast cancer diagnoses were expected in 2014.1,2 About one-fifth of breast cancers are identified in women younger than 50 years, and the median age at breast cancer diagnosis is lower compared with that of other prevalent malignancies, such as lung or colorectal cancer (ages 61 years vs 70 years and 69 years, respectively).2 The incidence of cancer has remained relatively steady in the United States since 2003, and overall disease mortality has decreased, related to both early detection and more effective treatment options.3 This is reflected in an increase of 5-year relative survival rates for female patients from 74.8% in the late 1970s to above 90% from 2003 through 2009.1 However, with an estimated death toll of 40,000 for the year 2014, breast cancer remains the second most common cause of cancer mortality among women, and patients with advanced or metastatic breast cancer (MBC) represent a disproportionate number of these patients.1,2

The prognosis for women with localized disease, approximately 61% of cases, has greatly improved. Current 5-year relative survival rates have reached 98.6%, and many patients experience long-term disease-free survival. However, outcomes for patients with distantstage breast cancer remain poor, with 5-year survival rates below 25%.1 Approximately 6% of patients present with metastatic disease at diagnosis; in addition, 30% to 40% of patients who receive treatment for early disease develop recurrence with distant metastases.5

Over the past 30 years, overall survival (OS) of patients with MBC has improved with the addition of more effective chemotherapeutic and targeted treatments; however, progression-free survival (PFS) and time-to-progression (TTP) remain virtually unchanged, except for patients with human epidermal growth factor receptor–2 (HER2)-positive disease, in whom the addition of trastuzumab to chemotherapy (CT) has significantly increased PFS.5-8 Metastatic breast cancer is considered incurable, and treatment goals are focused on reducing or delaying disease progression, prolonging OS, and symptom palliation, while maximizing the patient’s quality of life (QOL). The choice of therapy is guided by multiple factors, including severity of symptoms and disease, sites of metastasis, duration of relapse-free interval, hormone receptor (HR) status, HER2 status, prior treatment, anticipated side effects, and patient preferences.5,9

Breast cancer molecular subtypes
Breast cancer is a heterogeneous disease encompassing different biological subtypes with distinct gene expression profiles that have been identified by DNA microarray gene expression analyses.4 In retrospective studies, specific subtypes have been associated with differing relapse-free survival and OS, such that prognostic information and treatment choices are based not only on patient age, tumor size, histological grade, and lymph node engagement, but also on the analysis of key biomarkers including the estrogen receptor (ER), the progesterone receptor (PR), and HER2.4 Clinically relevant subtypes include ER-positive/HER2-negative (luminal A and luminal B subtypes); ER-negative/HER2-negative (basal subtype); HER2-positive; and tumors that have characteristics similar to normal breast tissue.4 Assessment of ER and PR content and HER2 status by immunohistochemistry (IHC) and in situ hybridization is considered an essential component of the pathology assessment and in patients with metastatic disease should be performed on both primary tumor and metastases, due to frequent discordance of receptor status.4

Approximately 72% to 80% of all breast cancers are HR positive (FIGURE 1), and the vast majority of patients with MBC have ERpositive/HER-negative disease.7,9,10 Estrogen receptors are intracellular ligand-induced transcription factors that, upon binding to estrogens such as estradiol, activate the expression of various genes involved in cell proliferation and differentiation; they also interact with signaling cascades outside of the nucleus.11 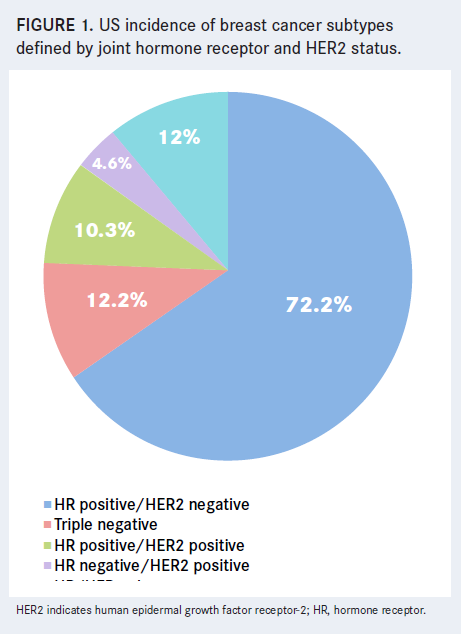 ER-positive breast cancer cells express predominantly the ER-alpha receptor, and transcriptional upregulation following estrogen exposure has been implied as a key mechanism that drives tumor growth, inva­sion, and angiogenesis.11 ER positivity renders cancers potentially sensitive to endocrine therapies, which target the ER by blocking receptor binding with an antagonist or by depriving the tumor of estrogen. Using additional markers of gene expression, including the proliferation marker Ki-67, and recurrence predictors that are based on multigene signatures, such as the 21-gene recurrence score (RS 21) or the 70-gene profiles, ER-positive tumors can be fur­ther subclassified according to their virulence, risk of recurrence, and likelihood of benefitting from adjuvant endocrine therapy or CT.12,13 Approximately half of ER-positive tumors are PR-positive, and downregulation of PR expression has been associated with the activation of pathways that contribute to the resistance to endocrine therapy.14 Tumors with high levels of ER and PR, negative for HER2, slowly proliferating (low Ki-67), of histologically lower grade, and with low-risk 21- or 70-gene profile scores are more likely to benefit from endocrine therapy and less likely to benefit from CT. These more indolent tumors largely overlap with the luminal A subtype of the current conceptual molecular classes (TABLE 1), associated with a more favorable prognosis and low recurrence risk.15,16 Pro­liferative ER-positive tumors with more aggressive morphology and less favorable genetic profiles correspond largely to luminal type B ER-positive/HER-negative tumors that are less likely to benefit from endocrine therapy; these tumors have a high risk for recurrence and poorer outcomes.17 HER-2–overexpressing tumors are highly proliferative with a poor prognosis; however, outcomes for patients have improved significantly with the emergence of targeted anti­HER2 agents, and HER2 tumor status is considered a main factor for choice of therapy.4,8 Triple-negative breast cancers (TNBC) are char­acterized by a high proliferative index, a high histological grade, and despite a high response to neoadjuvant CT, a higher risk for disease recurrence. 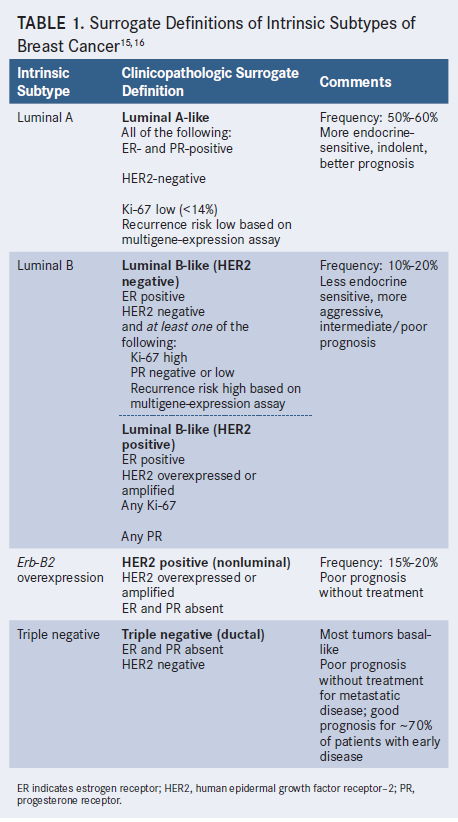 Approximately 20% to 30% of patients with early breast cancers will experience relapse with distant metastatic disease, and de­spite responsiveness to anti-estrogen therapies and frequent use of hormonal adjuvant therapy, one-quarter of women with ER-pos­itive disease will experience relapse.18 Risk of recurrence is influ­enced by stage at initial presentation and the underlying biology of the tumor (TABLE 1); independent risk factors for relapse include tumor size, nodal involvement, grade, lymphovascular invasion, and ER and HER2 status.19-21 Different breast cancer molecular subtypes are further associated with distinct patterns of relapse, metastatic spread, and substantial differences in survival after relapse.22-24 Overall, HR-positive MBC is characterized by the low­est incidence of metastases, late development of metastases, and highest propensity for bone metastases among all breast cancer subtypes, with development of osseous metastases as late as 10 to 20 years after initial diagnosis.25

The correlation of tumor IHC profiles from women with nonmeta­static breast cancer and subsequent outcomes revealed that HR-pos­itive tumors with slow proliferation (luminal A-like) had the lowest risk of local and regional relapse at 5 and 10 years.26 HER2-enriched cancers and TNBCs had the highest rates of relapse (prior to the introduction of trastuzumab), and HR-positive, highly proliferative luminal B tumors were associated with high rates of locoregional re­lapse.26 Similar findings were reported from other studies, including earlier relapse of basal-like and HER2 tumors (within 5 years) com­pared with luminal subtypes (ER positive, HER negative; continuing between 5 and 15 years),27 and significantly higher rates of 10-year disease-free interval for patients with luminal A-like disease (defined as ER positive, HER negative, low Ki-67; 86% of patients) compared with luminal B-like (defined as ER positive, HER negative, high Ki-67; 76%), HER2-positive (73%), and triple-negative (TN) (71%; P <.001) breast cancer.22 Ten-year OS was higher for patients with ER-positive/ HER2-negative breast cancer (89%) compared with luminal B-like (83%), HER2 (77%), and TN disease (75%; P <.001).22

Metastasis locations
The development of metastases may be detected by radiologic staging at initial diagnosis, by abnormalities in laboratory indices, or from the presence of focal symptoms such as abdominal or bone pain or from neurologic changes. Common sites for breast cancer metastases are bone, lung, and liver (TABLE 2).25,31 Brain metastases develop in approximately 10% to 30% of all patients with breast can­cer, and presence of brain metastases is associated with the shortest survival time compared with other sites of metastasis.27,32 The loca­tion of metastasis is associated with cancer subtype, with predomi­nance of brain metastases in HER2-enriched and TN subtypes, and of bone metastases in ER-positive/HER-negative and luminal HER2 subgroups.22,27,33 Recurrence patterns in patients with early disease revealed a higher 10-year cumulative incidence of bone recurrence (6.64%) in ER-positive/HER2-negative breast cancer compared with all other subtypes.22 The most common visceral metastasis site of ER-positive/HER2-negative disease was the liver.22 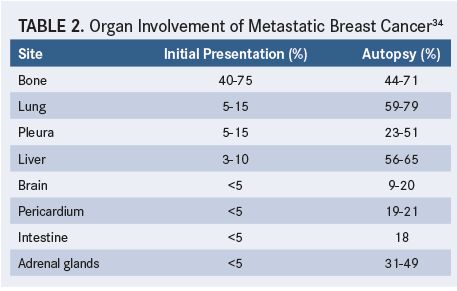